Nam Joo- Hyuk Age, Bio, Profile| Contact Details (Phone number, Email, Instagram, Twitter)- Nam Joo- Hyuk is a South Korean model and an actor who is famous for his lead role of Han Yi-an on the KBS2 drama series Who Are You: School 2015.  The actor has acted in a number of movies and TV Series. Nam has also appeared in a number of reality shows. Hyuk has also won a number of awards for his acting like “4th APAN Star Awards, 29th KBS Drama Awards” among others. In 2016, Nam has played supporting roles in Cheese in the Trap as well as Moon Lovers: Scarlet Heart Ryeo, Nam also acted in the variety show Three Meals a Day. The actor also appeared youth sports drama Weightlifting Fairy Kim Bok-Joo in 2016. In 2017, he will star in TvN’s fantasy-romance series Bride of the Water God. In 2019, Nam starred in the fantasy romance drama Dazzling. 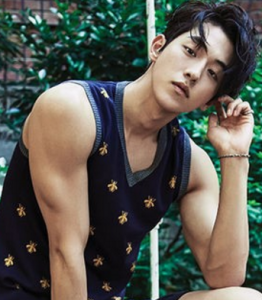